To be honest, it’s relatively infuriating in 2015 to see so many sites that have misconfigured SSL.

Everyone (including you business folks!) should have a basic understanding of how secure connections on the internet works.

The goal is to have anyone understand it’s importance, the basic parts of SSL, and very quickly understand if you are doing it wrong.

HTTP is a protocol that is used for communicating with web servers. Just as a recap - HTTP & HTTPS are different. The S stands for secure. The most important thing for you to know is that they are SEPARATE protocols.

What are SSL and TLS?

SSL (Secure Sockets Layer) and TLS (Transport Layer Security) are mechanisms for safely transmitting data. On the web, SSL and TLS try to do two things:

If you are non-technical… Use SSL Labs and call it good.

Go to https://www.ssllabs.com/ssltest/ … fill in your domain name, and click submit. Soon you will have an A-F score for how well your SSL is configured! Print out that page, and bring it to your web guy. If you’re unsure, drop me an email at [email protected] and I’ll help you get started.

… This is where I leave you. Keep reading if you are more technical :)

If you are more technical…

Awesome, I know I’ve slow played you so far, but let’s jump into things. I’ll say it again just because it is worth repeating… SSL Labs is a great place to start to get a good frame of reference -> https://www.ssllabs.com/ssltest/

At https://wiki.mozilla.org/Security/Server_Side_TLS, Mozilla has a few recommended configurations:

Let’s be real here, you should be at least targeting Intermediate in 2015.

Okay, what do we need to be looking at in your configuration? A few things:

… My goodness that’s a lot to wrap your head around. Let’s try and simplify it.

What you need to know: the web browser sends a list of supported cipher suites to the web server with an order of preference, and the server responds with cipher suite it selected from the list.

What you need to know: Don’t support SSLv1, SSLv2 or SSLv3. Why? SSL 1 & 2 were deprecated long ago, so it’s a non issue. SSL 3 is vulnerable to several exploits, so disable it. If you’re going to only target the newest browsers, you can also drop support for TLS 1 (do some research if this is right for you).

In cryptography, key size or key length is the size measured in bits of the key used in a cryptographic algorithm.

RSA is one of the first practicable public-key cryptosystems and is widely used for secure data transmission. In such a cryptosystem, the encryption key is public and differs from the decryption key which is kept secret.

While I could get into the intricacies of the Diffie-Hellman algorithm, bits of prime, and DHE_RSA cipher suites , I’m just going to give you what you need to know here.

HSTS is a HTTP header that states how long to continue using HTTPS for.
Sample HSTS header:

What you need to know: Use it if you’re planning on supporting HTTPS forever. So use it.

Forward secrecy allows the web browser and server to negotiate a key that never hits the wire, and is destroyed at the end of the session. This makes the only way to decrypt the communication is to break the session keys themselves.

Enabling forward secrecy can be done in two steps:

What you need to know: If you go with one of the Mozilla recommended configurations, you support forward secrecy.

I’m not going to go into this super in depth because the scope has already creeped quite a bit, but here are a list of vulnerabilities and where you can read more:

Things you should stop using… from Mozilla:

I’m just going to leave this here… because it’s that important.

If you’ve made it this far, congratulations. You may need to know way more than you need to, or you may have skimmed to the bottom. Either way, let’s get into some of the neat tools to help you configure and test your SSL setup.

If you’re a customer of DNSimple, use the configuration wizard. Enough said.

Cloud flare cannot make it any brain dead simple for you to add SSL. I use Cloudflare Full SSL (strict). There’s no excuse for at least setting up their Universal SSL.

If you’re setting up your SSL configuration from scratch, just use the super cool Mozilla generator and call it good. It supports Apache, Nginx, & HAProxy.

Holy shit, I’ve finally made it to Cipherscan, which was the whole reason I started this ridiculous article to begin with.

Cipherscan tests the ordering of the SSL/TLS ciphers on a given target, for all major versions of SSL and TLS. It also extracts some certificates informations, TLS options, OCSP stapling and more. Cipherscan is a wrapper above the openssl s_client command line.

Let’s get it installed. Using Yosemite, open up your terminal and install bash and coreutils via homebrew:

Next, clone the Cipherscan repo, and change into it’s directory:

Perfect! There’s a lot we can do with Cipherscan, but all we’re going to use it for is testing the a site, and looking at what we can do to improve our configuration.

Go ahead and try a command with the following structure:
cipherscan$ ./cipherscan DOMAIN.COM

So what does this tell us? It tells us exactly what cipher suites and protocols I use. Neat. Cloudflare is the top layer here, so that’s really what we’re seeing, but I digress.

The truth is, this really means absolutely nothing to most people, so let’s try the second command with the following structure:
cipherscan$ ./analyze.py -t DOMAIN.COM

So http://snelling.io doesn’t match any of the Mozilla recommended levels per se, but it doesn’t return anything bad! Hey oh. Looks like CloudFlare is good enough to not have any vulnerabilities. 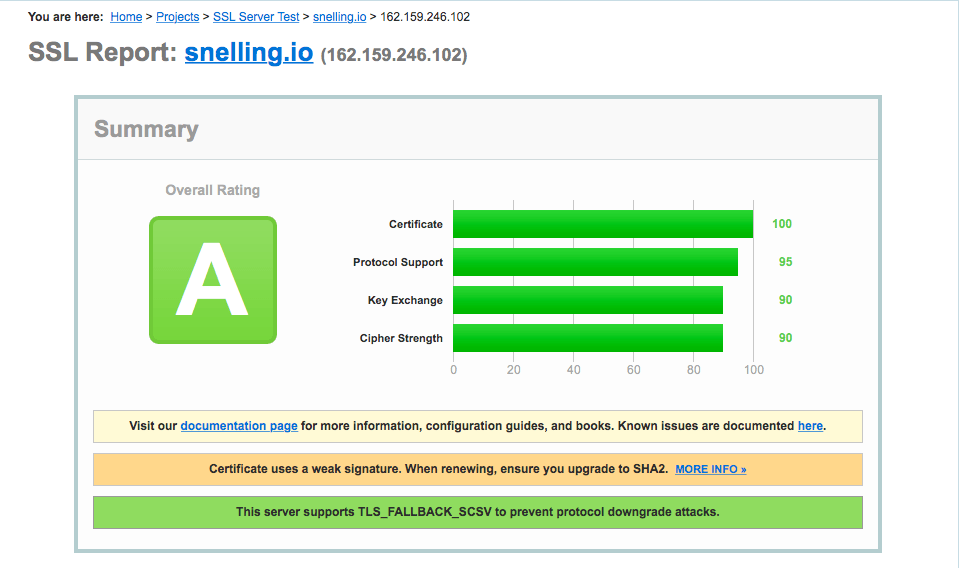 Okay, to just show what kind of actionable results we can get out of this analyze query, how about we use it on something insecure, like our local Tinker Federal Credit Union Bank!

Just to be sure, let’s run a quick SSL Labs scan. 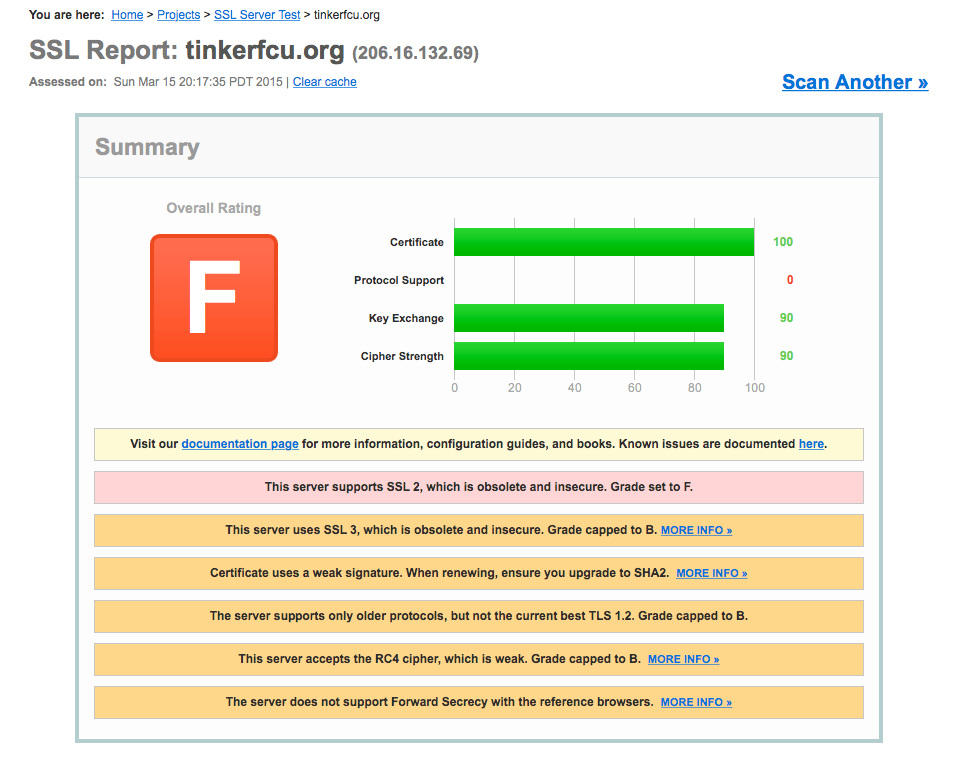 Okay, so banks SSL might not be as great as we originally thought. Hm. But surely an IT Department at a higher learning institution can get this right… 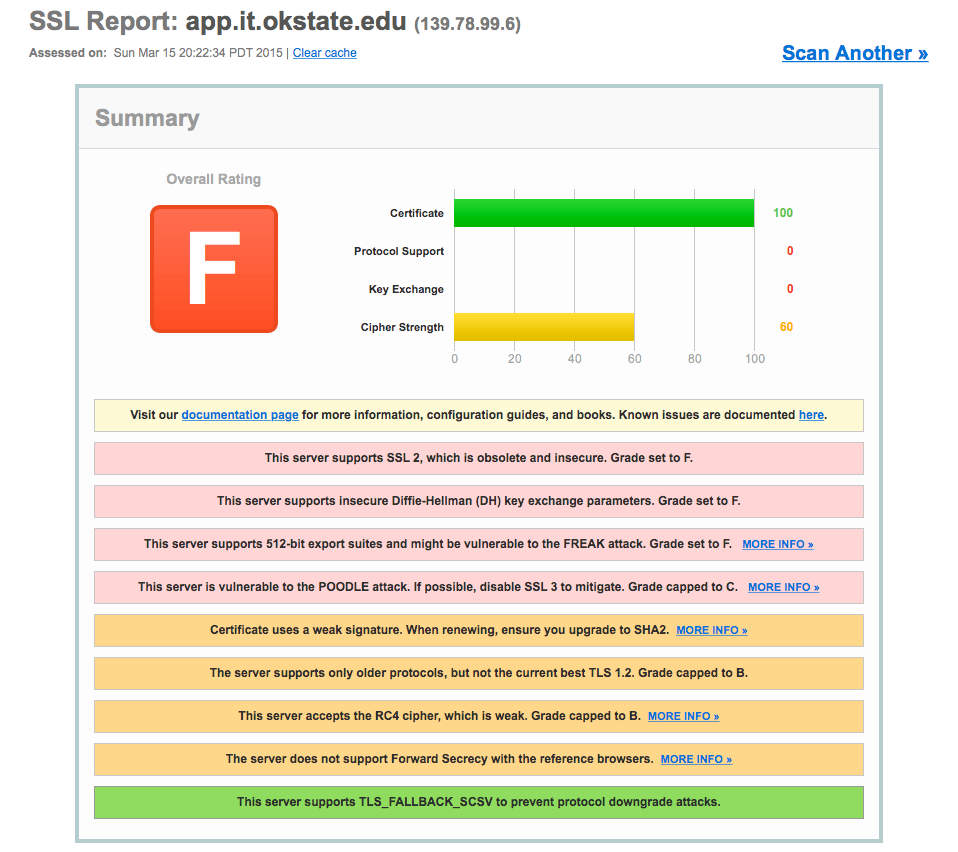 ... They really make it too easy to clown on them.

We shouldn’t tolerate insecure bullshit connections from banks and other websites. At the end of the day, use the tools and standard configurations to help aid the process. There are plenty of tools here to get you started down the right path in checking your own configuration.